Could Cardiff be sitting on an underground heating system?

WDS Green Energy is working in partnership with City of Cardiff Council and the British Geological Survey on an Innovate UK funded project which aims to show how heat within shallow groundwater under the Welsh capital can be used to provide a renewable low carbon heating source for homes and businesses in the city.

Ground source heat pumps have become increasingly common in the UK over the last 10 years, taking heat from the ground to provide heating and hot water for domestic and commercial properties at a relatively small scale. This project will investigate whether the technology could be used to support the design and implementation of a district and potentially city scale heat network in the future. 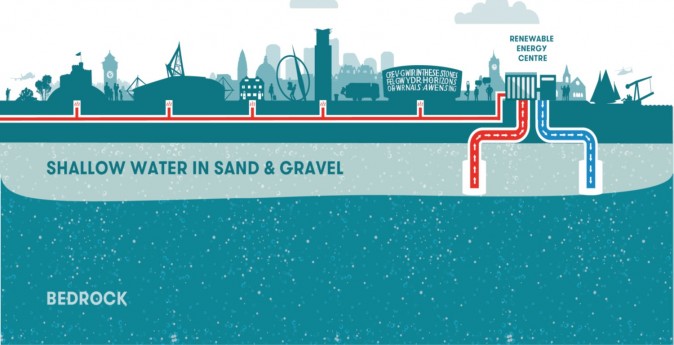 “As a specialist in ground source heat pump engineering, we’re  looking forward to working with the City of Cardiff Council and British Geological Survey on this unique project, and demonstrating to the public the benefits of low carbon, renewable technology in an urban environment using free ground water from beneath the city.”

“Schemes of this type are relatively unheard of in the UK but similar technology has been successfully used in Norway, taking water from local fjords as a source and using it to generate annual savings of around €2 million and 1.5 million tonnes of carbon – that’s the equivalent of taking 300,000 cars off the roads.”

“Figures like that clearly warrant further investigation and this project will allow us to do just that.  If successful the project will represent a step-change in the UK renewable energy market and will help directly address the challenges of Carbon reduction, energy security and fuel costs.”

Temperature monitoring of the shallow groundwater in Cardiff using a city-wide array of boreholes has showed the groundwater to be around 14˚C in April when the ground is at its coldest, this is some 2 ˚C warmer than expected in a non-urban area. Heat lost from buildings, sewers and other underground infrastructure contributes to these elevated temperatures and contributed to the ‘Urban Heat Island’ effect.  With the groundwater in Cardiff lying only 3 to 4m below the ground surface, abstraction of the shallow water for use by ground source heat pumps can become a more cost effective solution, compared to drilling many deep boreholes, for delivering heat to individual buildings and to district and city-scale urban heat networks.

To contribute to ‘proof of concept’ for urban groundwater heat capture and storage, a Nursery School in the Grangetown suburb of Cardiff has been retrofitted with an experimental heat pump system. Groundwater is pumped from one 20 deep borehole and passed through a heat exchanger. With only 2˚C removed by the heat pump system the spent water is then returned to the aquifer via a second re-injection borehole in an ‘open loop’ format. This demonstration trial has improved confidence in this low-carbon energy technology.

Renewable energy is critical to the long-term energy needs of the nation and the City of Cardiff Council is taking a lead in the investigation of new systems for the benefit of all residents under the Government’s energy trilemma objectives of reducing carbon emissions, improving security of supply and reducing costs.

To improve GSHP system design the BGS has developed a 3D computer model of the shallow geology beneath the city using historic borehole records. This model, along with constant monitoring, is enabling prediction of ground conditions in the top 50m, and can be used to simulate the long- term sustainability of up-scaling open loop heat pump technology to supply heat networks at the city scale.

This entry was posted in News. Bookmark the permalink.