The tiny village of Rudry sits to the east of Caerphilly and is one of many small, sedate villages that dot the Welsh landscape. In bygone years the inhabitants of these little villages made their livelihoods farming the land and many of the old stone built farmhouses still stand.
The owners of this converted farmhouse love the traditional feel of their home but where less impressed with the traditional inefficient clunking oil boiler heating system.

Fed up with the rising costs of running and maintaining the aging oil boiler system at his home the owner of this property was looking for a cost effective solution to heating his property.
With a passing interest in ‘green technologies’ the owner called WDS Green Energy who were able to explain in detail several options for a renewable solution to his heating issues. 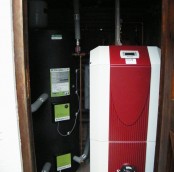 A ground source heat pump utilises pipes- called ground loops- filled with a mixture of antifreeze and water buried under the soil to extract heat from the ground. The ground stays at a fairly constant temperature under the surface and so the heat pump can operate throughout the year, with longer loops allowing more heat to be extracted but requiring more space, so to utilise some of the available land around this converted farm house WDS Green Energy installed a Dimplex SI 14 ME ground source heat pump with a ground loop collector system.
To further offset the running cost of the heating system the owner of this converted farmhouse chose to have a 4kW solar photovoltaic panel array installed upon the south facing garage roof. This photovoltaic array will generate green electricity from sunlight which can then be used within the property and any excess electricity not utilised on site sold back to the National Grid

This converted farm house is now more energy efficient with the operation of the ground source heat pump system costing some 50% less than the equivalent in an Oil or LPG boiler.
The installation is also a renewable technology eligible for support under the RHI, a Government incentive, due to begin in early 2014.
The RHI pays a fixed tariff rate of 18.8pkW/h for ground source installations such as this one, per unit of renewable heat generated for a period of seven years and the tariff rate is inflation linked and for a heat pump of this size that is an income of around £3,500 per year.
The solar photovoltaic array upon the roof is eligible for payments under a different tariff scheme called the feed in tariff scheme (FiTs) which like the –soon to be launched- RHI scheme pays per unit, in this case for green electricity, generated by the scheme.